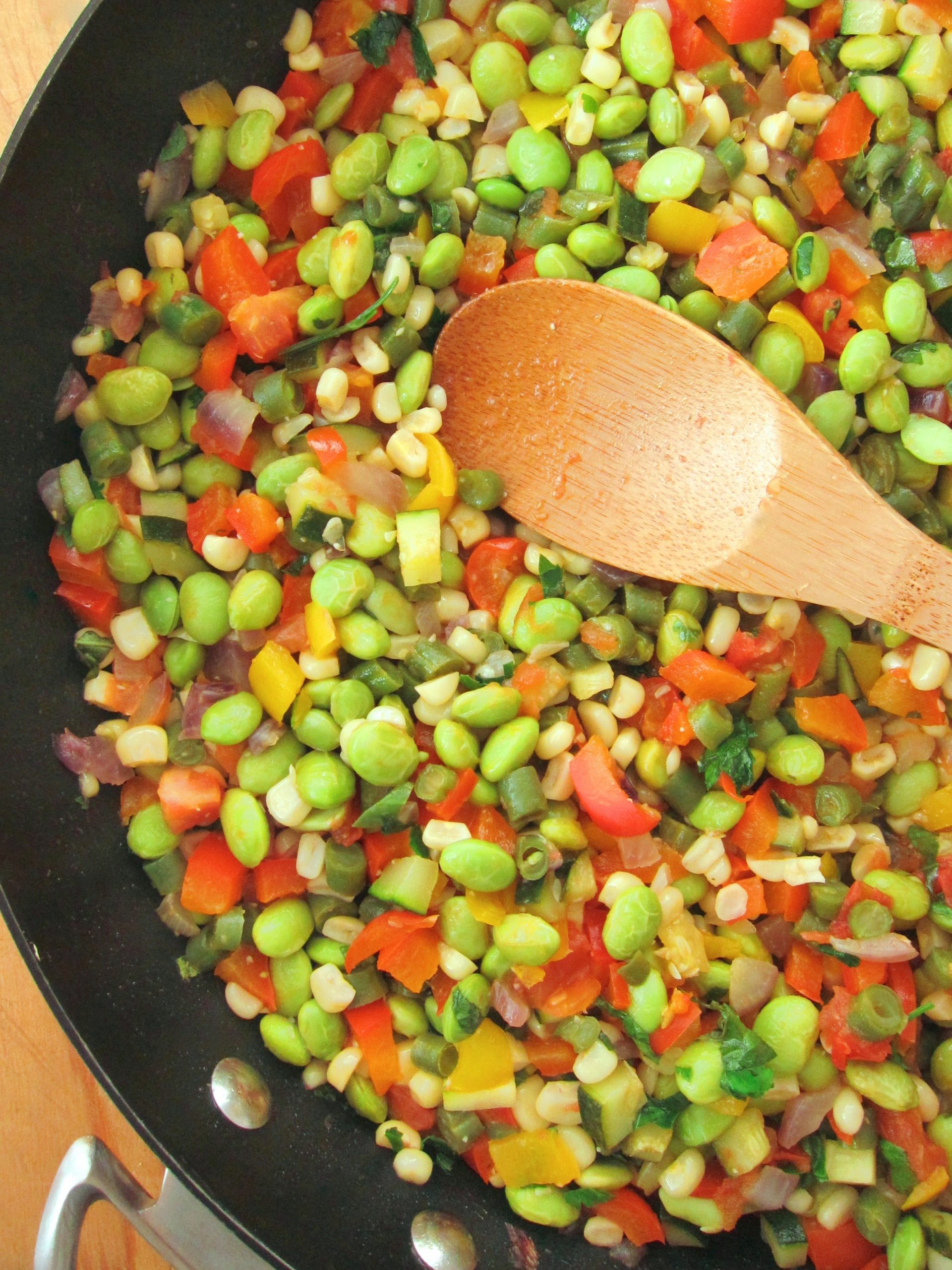 Succotash is a food dish consisting primarily of corn and lima beans, but I was glad to find out from Wikipedia that it can also be made with other shelled beans because I tried the lima beans and it was good, but I love edamame beans in this recipe. And lima beans are usually only found frozen and frozen vegetables, with the exception of peas, can get rubbery.

Traditional succotash can also include bell peppers and tomatoes, so why not just throw in whatever you want and make it very healthy and a little less fattening without all the sweet carbs of a lot of corn! In the Indian Narragansett language, the spelling was “sohquttahhash,” which I’m not sure we can pronounce. It meant “broken corn kernels” and was first prepared by native Americans in the eastern woodlands. Today it is a traditional dish of many Thanksgiving celebrations in New England. Because the ingredients were readily available and inexpensive, the dish was popular during the Great Depression.

Wikipedia also has this interesting trivia. “Sufferin’ succotash,” we all know well as a catch phrase of Warner Brother’s cartoon character Sylvester the cat and was also used by Daffy Duck, was a phrase used in the old days around impressionable people. The Depression-era exclamation of annoyance was a ‘minced oath’ which is a euphemistic expression formed by misspellings, mispronouncing, or replacing part of the taboo term to avoid being offensive, like the word ‘darn.’ The original phrase the was minced was “suffering savior.”

This is a beautiful and delicious side dish for roasted chicken or turkey.

Note: Use more green beans and peppers and less corn and squash for low carb diets

Sauté onion in the oil until translucent and starting to brown. Add bell peppers, green beans, zucchini, corn and edamame. Cover and cook until tender, about 12-15 minutes. Stir in tomatoes and cook one minute. Stir in butter. Season with salt and pepper. Sprinkle with parsley and basil.
*Trader Joe’s Trader Grotto’s Sicilian (cold pressed) Extra Virgin Olive Oil is a blend of three olives from Sicily, packaged in Italy in a beautiful bottle. It’s light and delicious. Store it in the dark and use up within a month.