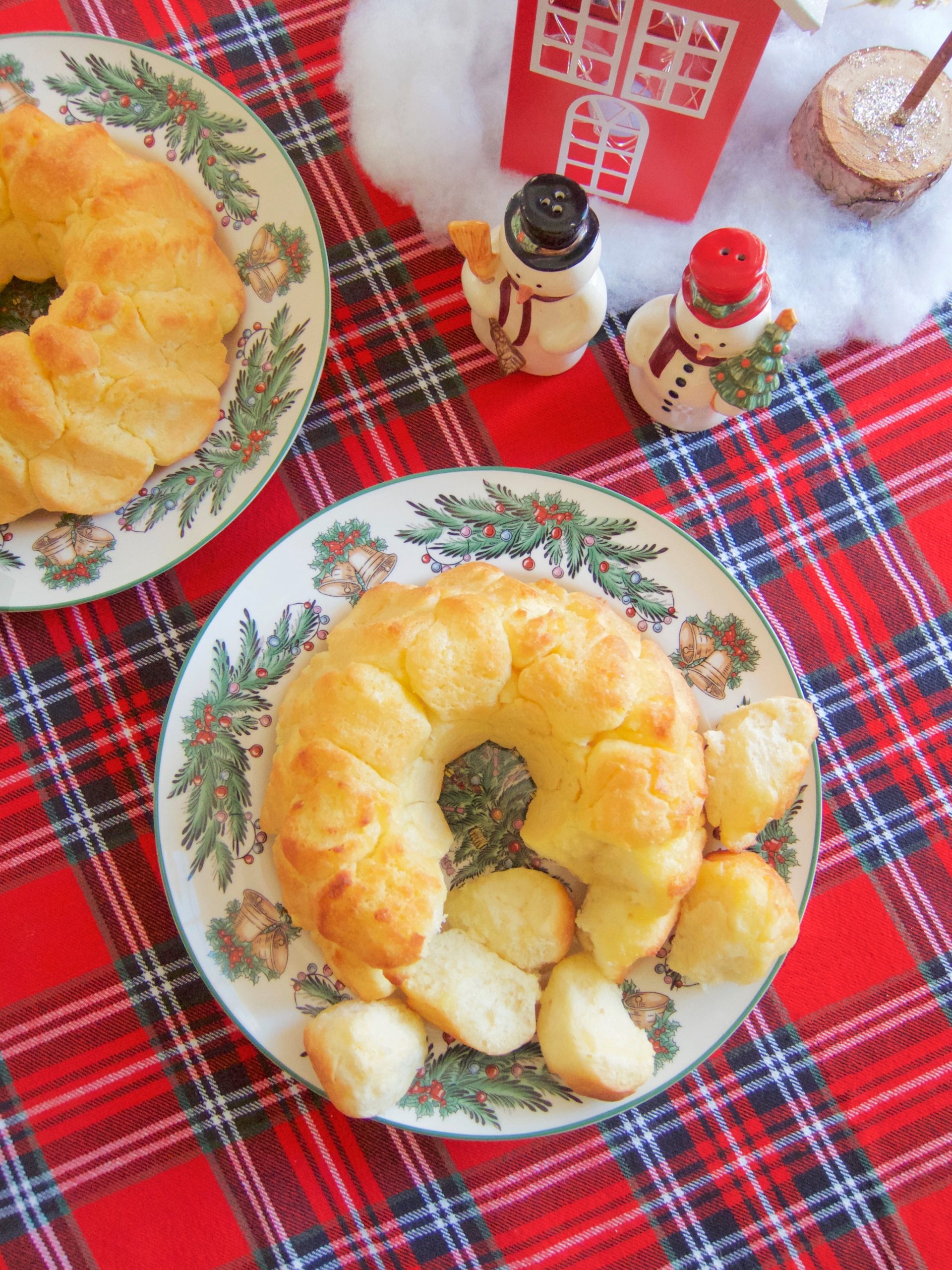 “Monkey bread, also called monkey puzzle bread, sticky bread, Hungarian coffee cake, golden dumpling coffee cake, pinch-me cake, and pluck-it cake is a soft, sweet, sticky pastry served in the United States for breakfast or as a treat. It consists of pieces of soft baked dough sprinkled with cinnamon. It is often served at fairs and festivals.
The origin of the term ‘monkey bread’ comes from the pastry being a finger food: the consumer would pick apart the bread as a monkey would.
What most people know as monkey bread today in the United States is actually the Hungarian dessert arany galuska [“golden dumpling”]. Dating back to the 1880s in Hungarian literature, Hungarian immigrants brought this dish with them when they immigrated to America and began introducing it into the country’s food landscape when Hungarian and Hungarian Jewish bakeries began selling it in the mid-twentieth century.
In 1972, a cookbook published by Betty Crocker included a recipe for arany galuska, which they referred to as ‘Hungarian Coffee Cake’. As it became more popular in America, arany galuska came to be confused with monkey bread in which the balls of dough are not dipped in cinnamon and sugar but only in butter {‘butter monkey bread’}. ‘Monkey bread’ soon became the more common name for this Hungarian Jewish dessert.
Recipes for the {butter monkey} bread first appeared in American women’s magazines and community cookbooks in the 1950s, but the dish is still virtually unknown outside the United States.”
Wikipedia
It’s thought that the butter version began and became popular in California in the 40’s. The food icon and former Neiman Marcus food services director Helen Corbitt contributed a butter monkey bread recipe for the store’s grand opening in 1967.
The term ‘monkey bread’ is now used for both the coffee cake and the no cinnamon or sugar dinner roll versions. Most monkey bread recipes include cinnamon and brown sugar and a glaze which is delicious but the plain bread under all that has a flavor that is unique from any other bread that is mmmmm… so good. You will find a garlic bread version below which is also really good.
Many of the recipes online are also using store bought biscuits which is much easier and wouldn’t matter if you were doing the coffee cake version with the cinnamon, sugar and glaze. Doing it from scratch is more trouble but this food processor recipe my mom adapted from my grandmother’s recipe makes it much easier and you can enjoy the very special flavor of butter only monkey bread.

You will need 2 small bundt pans. I’ve tried both the lighter and the dark, non-stick interiors and for my oven the darker works better.
Place the milk and sugar in a sauce pan over medium high heat. When milk has risen quickly up the pan and formed a skin (‘scalds’) remove from heat. Cool to a little warmer than lukewarm. Sprinkle the yeast over the milk and let the yeast begin to bubble (‘proofing’). It takes between 5 and 10 minutes depending on the temperature of the milk and the room.
While the yeast is proofing, place 3 cups (16 oz) of flour, and the salt in a food processor bowl and get the cold butter ready by cutting it in about 6 pieces, keeping it cold in the refrigerator, ready to put in the processor.
Once the yeast has proofed, gently beat in the 2 eggs using a fork.
Place the cold butter on the flour in the processor and process until blended. Add the milk mixture and process. Add 1/4 cup flour and process. Cover the processor with a dry dish towel and let rise until double in bulk, about an hour depending on the temperature.
Have the melted butter ready. When the dough has finished rising, turn the processor on briefly to ‘punch’ the dough down. Use the remaining 1 tablespoon of flour to flour your hands so you can remove the processor blade so you don’t risk cutting yourself while you are making the balls of dough. You’ll be working with dough that is very sticky so it’s necessary to dip your fingers in a bowl with flour or in the butter before you pinch of the pieces of dough to make the balls. Pinch out 1″ to 1 1/2″ pieces and mold them with your fingers or in your hand and then dip them in the melted butter, placing them in two small bundt pans or ovenproof ring molds. As you place them in the pans, start with a row at the bottom of each pan, placing the pieces of dough 1/2″ apart, then adding pieces in between until all the dough is gone. I make a layer in one pan, then a layer in the other, going back and forth to make sure I get the same amount in each pan.
Pour the remaining butter over the pieces, dividing it evenly between the two pans.
Place the pans together, cover with wax paper and the dry kitchen towel. Let rise until double in bulk, about 2/3’s way up the pan. Do not over-rise. This rising time can go very quickly because of the warmth of the butter, usually only 20 -30 minutes.
Have the oven preheated to 400 degrees and ready. Bake for 15 minutes. Let cool in pans 5 minutes, then invert onto serving plates.
They should be brown on the bottom, not doughy which becomes more of an issue with light colored pans like tin or aluminum. If they come out doughy slide them on to a cookie sheet and put them back in the oven and they will brown up nicely. But be sure not to overcook them.
Darker pans, the material of the pans, and the position of the racks in the oven, gas or electric oven — all make a difference.
For garlic bread, mix 1 1/2 tablespoon of minced green onion with the 1/4 cup of flour and mix 3 small minced garlic cloves with the melted butter and sprinkle a total of 1/2 cup parmesan cheese over the balls of dough, dividing it between the two layers.