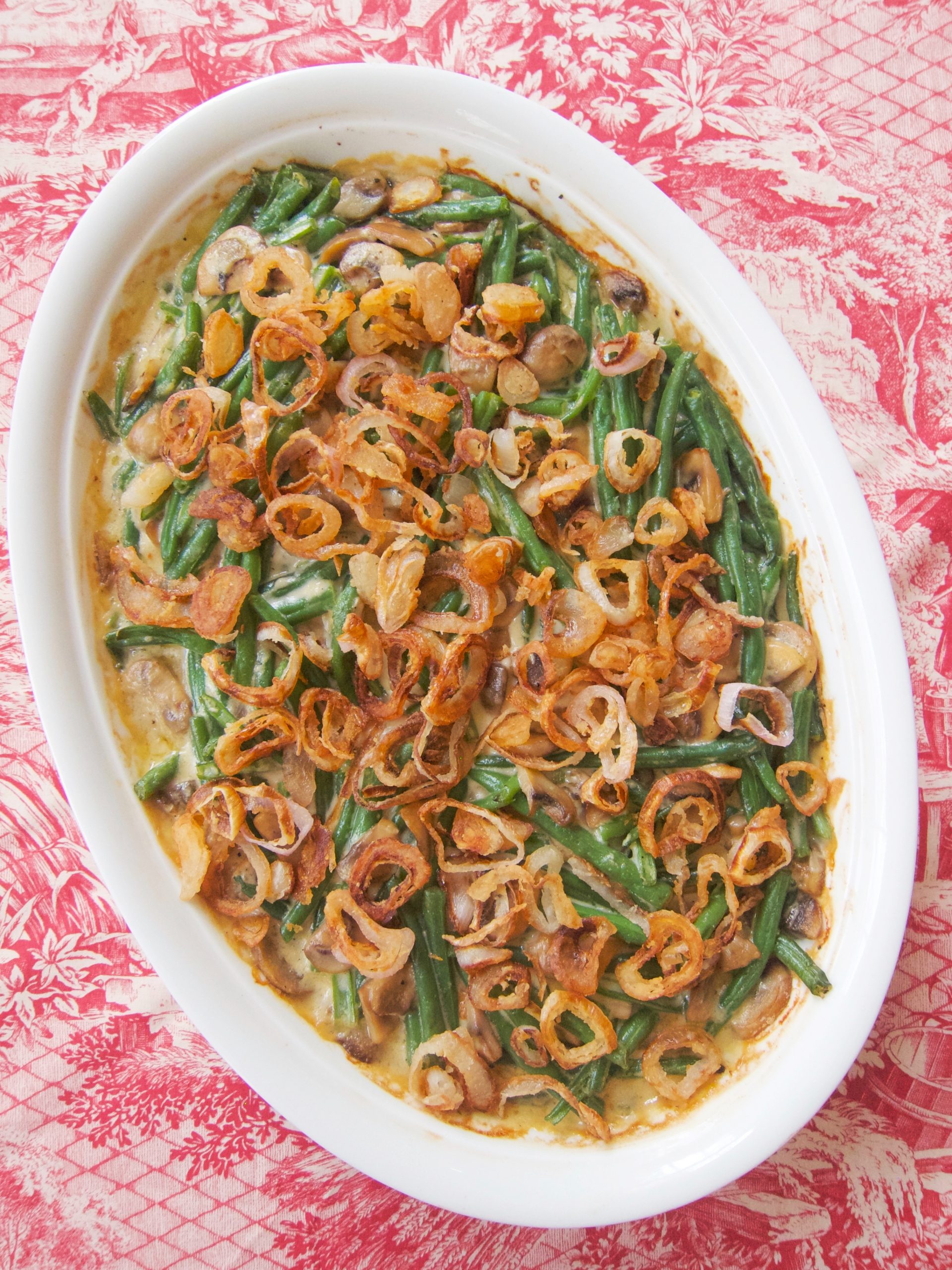 If you are looking for the traditional holiday green bean casserole recipe with fried onion rings that has stolen the hearts of millions since its creation by Campbell’s Soup in 1955, here is a great recipe – adapted from two recipes, Fine Cooking’s and Cook’s – for a green bean casserole that is made from scratch (the canned cream of mushroom soup replaced with a fresh mushroom cream sauce) that is tastier than the classic recipe!

I made Cook’s recipe first and it was good but I thought is was a little complicated. After doing more research, I found Fine Cooking’s recipe in my collection of recipes to try scrapbooks. Their’s called for the more tender French green beans called ‘hericots verts’, instead of regular green beans and it was simpler and better for the green beans and sauce parts of the recipe. But for their shallot topping Fine Cooking deep fried the shallots which for me was going to be messier and more trouble than the crispy shallot topping from Cook’s green bean casserole recipe that has you fry them in just a little oil. So I went back to Cook’s recipe for the topping.

The green beans and mushroom sauce can be made the day before, refrigerate and gently reheated, but the shallot topping needs to be kept separate and reheated separately if you want to keep them a little crispy.

To blanch the beans, bring a large pot of water to a boil and boil the green beans for 4 minutes and rinse under cold water to stop the cooking. Set aside.

Heat a large skillet and add the butter, and when it’s melted, add the mushrooms and sprinkle lightly with salt. Sauté the mushrooms until they are starting to brown, about 8 minutes, add the Vermouth and cook 30 seconds. Sprinkle the flour over the mushrooms and stir for 1 minute. Then pour in the chicken stock and whipping cream and stir in the salt and pepper. Let gently cook down by a third until thickened and darker (it will look like mushroom soup), about 13 to 15 minutes.

Cut the green beans in half so they aren’t so long and fold them into the mushroom sauce. Transfer to the baking dish. Bake uncovered at 350 degrees for 20 minutes. Top with the crispy shallots.

Put two paper towels on a large plate. Place shallots, flour, salt and pepper in a bowl and toss, separating the rings. Heat 3 tablespoons oil in a 12″ heavy skillet on medium high, add half coated shallots and sauté about 4 to 5 minutes, using tongs to turn them over, until lightly browned on both sides (don’t let get too brown or they will taste burnt). Remove them one by one on to the paper towels as they reach the right color. Repeat with other half.