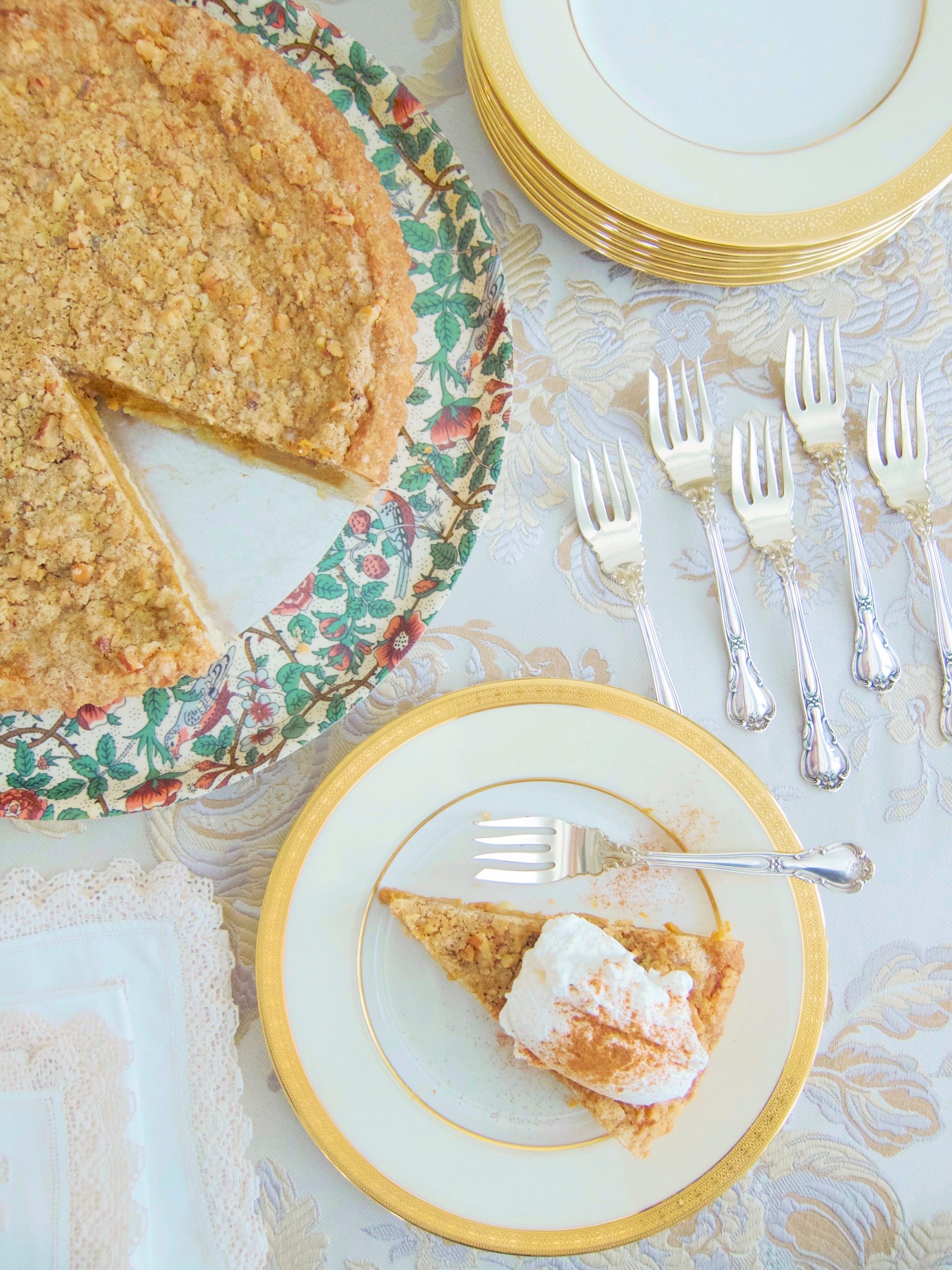 I ran across this recipe in a Fine Cooking magazine and was going to make for Christmas. Instead it just stood in a pile of recipes because there wasn’t time to make it. But after Christmas I didn’t want to file it away and wait until next Christmas. I’m so glad I didn’t. Yummy!

The recipe called for 9 ounces or 2 cups of flour. When I used the 9 ounce weight measurement for the flour, butter from the crust leaked as it began to cook and I had to quickly place a piece of foil on the lower rack. It wasn’t enough flour. The next time I made it I used the 2 cup measurement and it was much better. I had put a piece of foil directly under the pan just in case and it was the right thing to do. It’s not unusual to have to do this with spring form and tart pans. To measure the flour, spoon it into the measuring cup. If you scoop the flour using the measuring cup, you will have too much flour.

The recipe also listed orange zest in the ingredients for the crust which you would then need to chop. Using grated orange rind was fine. Either way would work.

Cinnamon was added to the optional whipped cream condiment.

Blending pastry ingredients together using your fingers will warm up the butter in the dough. Adding the cream and a whole egg through the tube of a food processor as it’s running could lead to the butter being over mixed with the flour. For these reasons Fine Cooking has you do it in a standing mixer with the paddle attachment.

Mix the flour, sugar, grated orange rind, and salt for 30 seconds. Add the butter and combine on low speed for about 3 minutes until the butter pieces are the size of peas. Add the egg and cream and mix on slow speed until the dough is just combined. (Over mixing will make the dough tougher.) Pour out the dough on to a piece of plastic wrap and use the plastic warp to form the dough into a disk about an inch thick. Refrigerate for 1 hour or up to a week.

Roll the dough out starting from the center and moving to the edge, lifting the dough up and making quarter turns and rolling again from the center out, until it’s 13 inches in diameter. As you are doing this use as little flour as needed to avoid sticking to the surface and rolling pin and handling the dough as little as possible. Lay the dough over the rolling pin and transfer it to a 11 inch tart pan with removable bottom. Fold the extra length into the sides of the pan making the edges no more than 1/4 inch above with the top of the pan, and about 1/2″ thick.

Spoon the filling (below) into the crust and sprinkle with the streusel topping (below). Put a piece of foil under the pan or on the rack below to catch any butter drips and bake in a 350 degree oven for 65 to 75 minutes. Cool for 2 hours. Can be refrigerated and then brought back to room temperature or eaten slightly chilled. Serve with whipped cream sprinkled with cinnamon.

Put the flour, both sugars, cinnamon and salt in a food processor and pulse until just crumbly (Don’t let it start to gather). Stir in the nuts and crystalized ginger.

Pour the cream into the mixer bowl. Whip for several minutes until peaks are starting to form. Add the sugar and vanilla and continue beating until the cream changes from very soft looking to stiff, before it starts to become butter. At this perfect point the whipping cream will have a very buttery taste and it will hold for more than a day before it starts to separate.