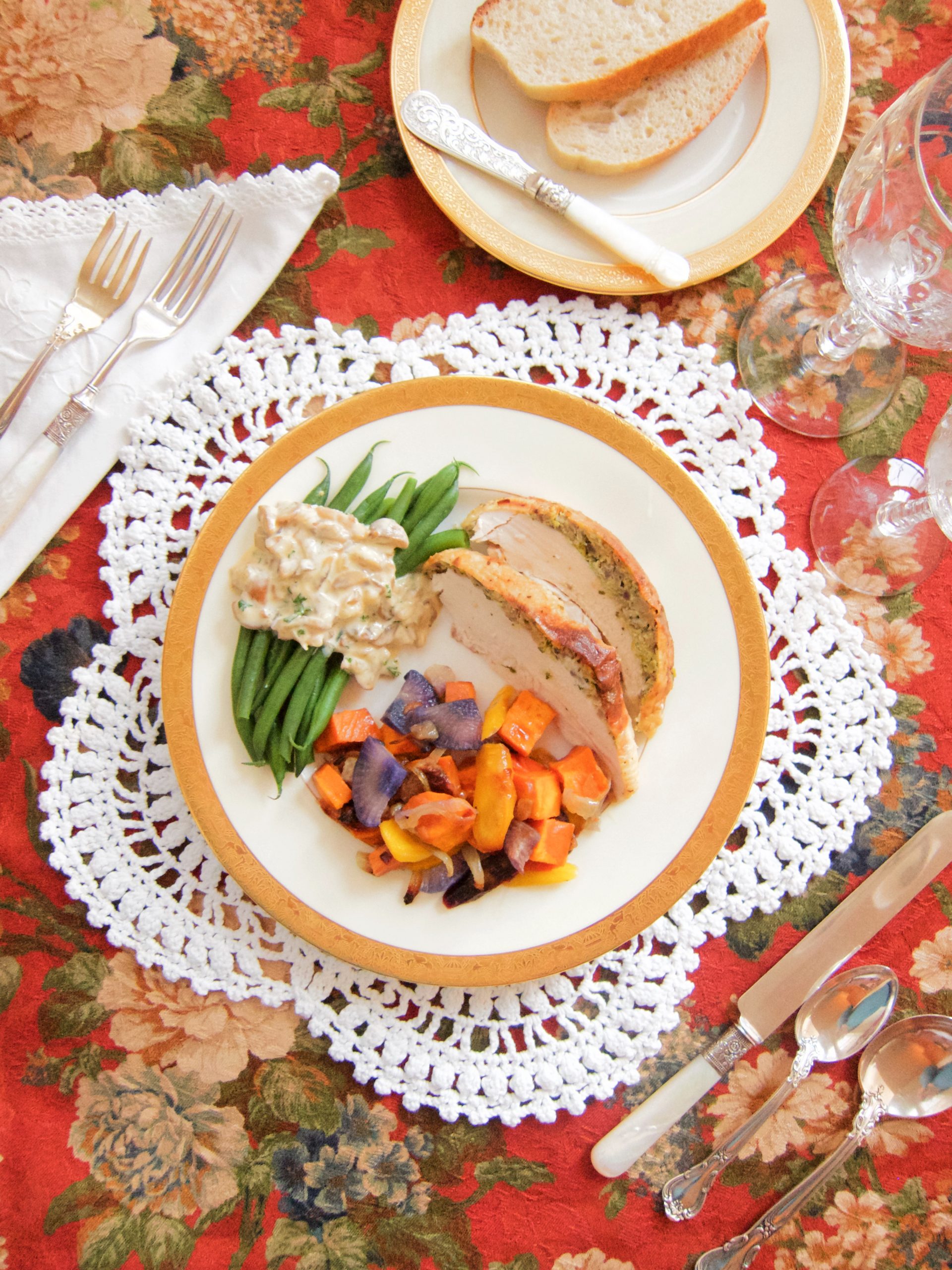 While looking through the spice cabinet last week, I took particular notice of a jar of herbs de Provence. It was something I’d never cooked with before but I knew it was something special in the history of French cooking. I wanted to know more about it so I looked up the name.

Sur La Table’s website said that “Herbs de Provence is a blend of dried herbs frequently used in southern French cooking, and always contains thyme, savory, marjoram and oregano in equal proportions. Lavender flowers are often added and occasionally lesser quantities of other herbs can be included.” Wikipedia adds one more herb to the basic list, rosemary, and says cooking with these herbs is considered typical of, specifically, the Provence region of southeast France. The herbs were each measured separately and it wasn’t until the 1970’s that the commercial blends of the herbs began to be sold under the name ‘herbs de Provence.’ The addition of lavender to the blend started in North America. The Trader Joe’s version I was holding was a blend of thyme, marjoram, savory, rosemary, basil, sage (instead of oregano) and lavender.

As I began to research a good recipe for the herb blend, I started with going through my mother’s cooking classes, knowing she was trained in French cooking where she would have been introduced to this blend of herbs. There I came across this recipe for Chicken Olney, a spatchcocked, stuffed and roasted chicken, which she learned to make at Tante Marie’s Cooking School in San Francisco. It was one of her favorite recipes to cook for special occasions. Another family favorite was (and still is) Chicken Gary. Knowing the latter was named after a local chef, I researched the name Olney. He turned out to be a big deal and a very interesting read on the internet.

Richard Olney (1927-1999) was an American painter, food writer and sought after wine and food pairing expert, best known for his books on French country cooking. He was born in Iowa, and first moved to France in 1951, in Paris, and spent a majority of his adult life living in a house above the village Solliès-Toucas in Provence, France. He was considered one of the most influential food writers of his era having a huge impact on nouvelle cuisine and California cuisine, befriending a number of influential foodies of the day both in France and the States. He was a contemporary of James Beard (1903-1985) and taught cooking classes in Beard’s home. Beard was an American cook, cookbook author, teacher who mentored generations of professional chefs. I once visited his a restaurant he owned in New Orleans and I bought his Cajun cookbook and made his wonderful turtle pralines many times.

My mother Grayce Flanagan (1927-2018), a culinary arts instructor who taught in private homes and culinary store schools in the Los Angeles and Orange County areas, was a contemporary of these food geniuses and part of the California cuisine movement which was infusing different cuisines and promoting using fresh local produce and other local food.

Epicurious was inspired by Olney’s ‘spatchcocked,’ or butterflied, and stuffed roasted chicken recipe. They left out the zucchini replacing it with additional ricotta. They say the creamier stuffing has a “popover or soufflé type of texture.” You will also notice that their recipe calls for fresh oregano and parsley and no dried herbs. Simply Recipes also uses all ricotta and their herbs are fresh basil and tarragon. They have a video to show you how to spatchcock the chicken.

This following recipe my mother taught in her classes was the one from Tante Marie Cooking School, which used less butter and has some short cuts. Richard Olney’s original recipe, copied from his cookbook, is below along with some of his introduction to the recipe. There are several pages of introduction and information and his book lists some other filling suggestions.

Spatchcock the chicken by removing the backbone of the chicken {or cutting down one side of it}, turning the chicken breast side up, and flattening it, breaking the bones underneath {Or grab both sides and pull each of them back. The bones will loosen so it lays flat and the full legs and thighs are facing up so you can stuff them}. Carefully loosen the skin from the meat using your fingers or a rubber spatula that doesn’t have sharp edges that will cut the skin, then stuff handfuls of the zucchini mixture under the skin, legs, and thighs and breasts {To keep the skin from tearing you can move the filling into place in the legs and thighs from the outside}. Mold chicken around legs and thighs to look like a chicken. Rub with oil and sprinkle with salt and pepper {and a sprinkle of herbs} and place on a roasting pan.

This can all be done ahead of time and chilled. Roast in a 375 degree oven for 1 1/2 hours {start checking at 1 hour and 15 minutes} or until inside reaches recommended poultry temperature. Let rest 10 minutes, carve and serve.

Another filling to try is replacing the zucchini and onion with a leek and an 8 ounce box of mushrooms, cooking them the same way, letting the juices be released and then waiting for the mixture to dry but not letting it brown. Adding some vermouth if you like and let that cook down. Then mix in 2 tablespoons chopped parsley.
*Simply Recipes has a video to show you how to spatchcock a chicken.

“This recipe has excited a great deal of enthusiasm in my classes.

Sprinkle the chicken on both sides (but not beneath the skin) with herbs, pat and rub generously with oil and leave to marinade for an hour or two.
Split the chicken the entire length of the back, beginning at the tail, using heavy poultry shears and cutting it, as nearly as possible, through the center of the backbone. Open it out on a chopping board skin side up, the joints joining drumstick and thigh forced inward, facing. With the flat side of a mallet or cleaver — or with the heel of your hand flatten it out with a firm whack, fracturing breastbone, ribcage structure, collarbone, and wishbone.

Mash the cheese and butter together with seasoning and herbs, using a fork; add the egg, mashing. Stir in the onion and zucchini, and, finally, the Parmesan, adding enough to bring the stuffing to a firm consistency.

Preheat the oven to 450 degrees F.

Loosen the skin of the chicken, starting at the neck end. The skin is securely attached by tendons only at the breastbone, drumstick tips, and along the backbone. Elsewhere only fragile and easily ruptured membranes keep the skin and flesh together. Work first with the fingertips then with your whole hand, loosening the skin from one breast, then the thigh and finally the drumstick. Repeat on the other side.

Stuff the chicken, taking a handful of stuffing at a time and forcing it into place, with the fingers of one hand beneath the skin while molding with the other from the outside. Coat drumsticks and thighs well before worrying about the breasts. When all the stuffing is in place, fold the neck-skin flap, if there is any, over the throat orifice and tuck it beneath the bird. With a small sharply pointed knife, pierce the web of skin and thin bleach between the inside of the thigh and the tip of the breast, making a slit just large enough to receive the drumstick tip. Force the drumstick gently up and push its tip through the slit to the underside. Place the bird in its roasting pan (a large skillet or a round, shallow earthen ware baking dish are ideal receptacles) and mold the surface with your hands to force the skin and stuffing into a plump version of the natural form. Salt and pepper.

Roast, starting at 450 degrees F and turning the oven down to 375 degrees F after 10 minutes. Start basting regularly after a half an hour. Count 50 minutes to 1 hour in all, depending on the size of the chicken, and if after about 40 minutes it seems to be coloring too rapidly, turn the oven down further, placing a sheet of foil over the bird.

Transfer to a heated platter and carve at the table. Carving is easy; just cut in half down the middle, separate the breast and wing from the leg quarter, cut the leg into thigh and drumstick, and the cut the breast crosswise in two pieces, one with the wing attached.

*Coarsely shred or grate the zucchini or put through the medium blade of the Mouli-juliènne, reducing them to spaghetti-like threads, arrange in layers in a mixing bowl, sprinting each layer with salt, and leave to stand for half an hour. Squeeze the juliènne with your hands—in the bowl and in its liquid—until it is swimming. Pour into a sieve, press to rid it of flagrant moisture, them form the mass into a ball and squeeze tightly and repeatedly between both hands until no more liquid may be wrung from it. Sauté in the butter over a medium flame for 7 to 8 minutes, tossing often and spreading the mass out again with a wooden spoon until well dried and lightly colored.