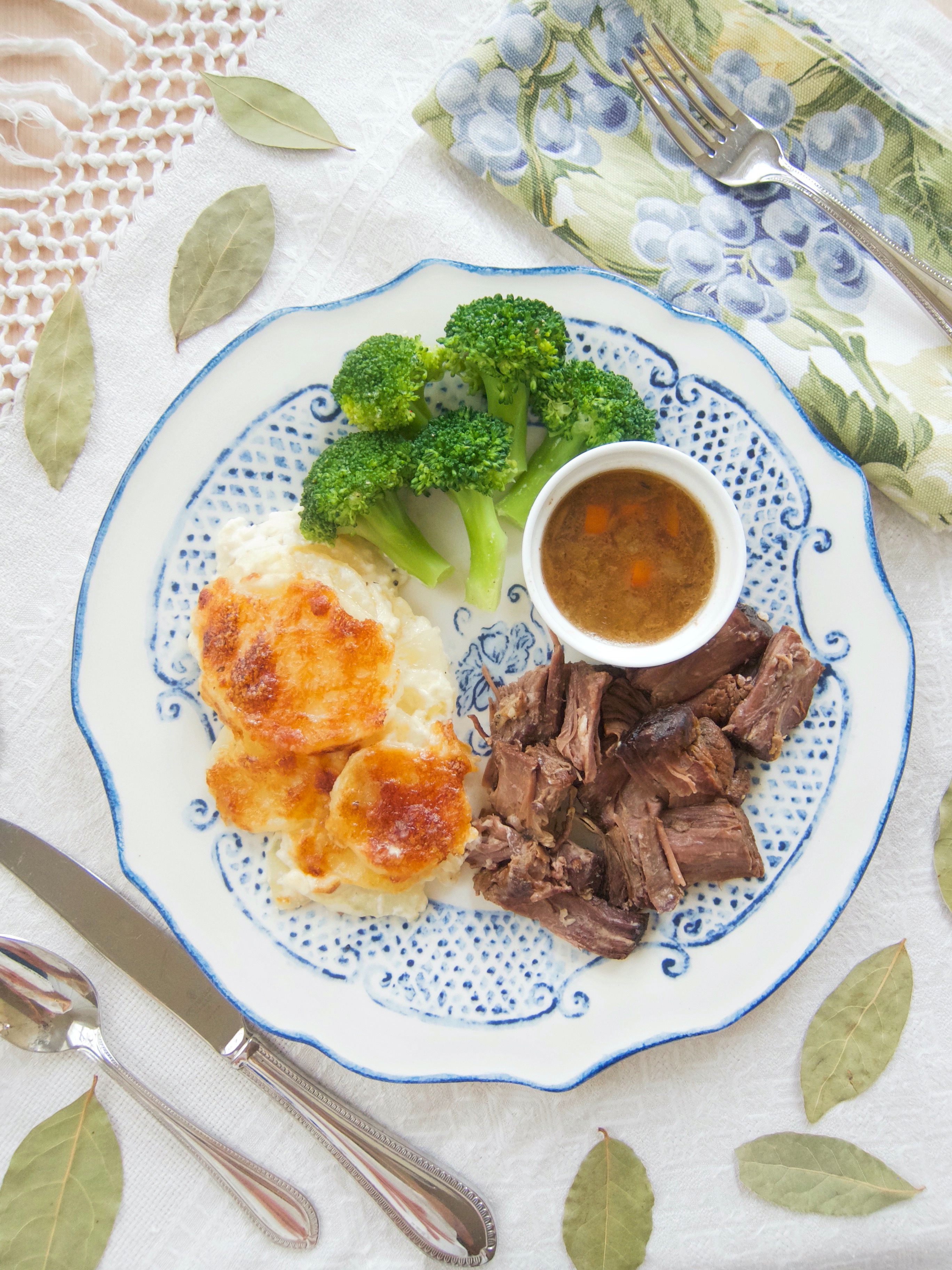 Easy Pot Roast was first posted in March of 2014 with the Boursin Mashed Cauliflower recipe, but you won’t find it there anymore. Pot roast is my favorite meat and I’ve been discovering over the years that some of the ingredients and steps weren’t necessary, making the recipe even simpler. I had begun with a recipe in America’s Test Kitchen’s Cook’s magazine that called for a little sugar and both beef and chicken broth. I had been checking on the roast to make sure the liquids were only going two thirds of the way up the roast and removing them when they got too high and keeping that in a measuring cup in the refrigerator until it was time to make the gravy. Also at that time I thought the amount of marbling in the roast made a difference in how tender the roast turned out. But all this has changed.

Adjusting the recipe reached a point recently where it became so different from the original recipe in Cook’s magazine that I needed to redo the post with new pictures. America’s Test Kitchen engineers are brilliant. I knew this when I was doing research for a good gluten free bread recipe and found their trick of using psyllium along with a few other things they did to get a perfect loaf. So the mirepoix flavoring and covering the Dutch oven with foil, before setting lid on, that is in their Cook’s magazine “Simple Pot Roast” recipe, is still part of this recipe and I don’t plan on experimenting on changing those.

The experimenting I’d been doing each time I made a pot roast wasn’t just about seeing if it could be made quicker and simpler like we like to do with all our recipes. My most recent discovery was being able to cut the time in half, and this alone made the biggest difference, not just in how easy the recipe was becoming, but in tenderness and flavor. In most recipes for pot roasts, ‘low and slow’ has been an 8 to 10 hour cooking time. I wasn’t having a problem with the meat falling apart, or at least I didn’t think I was, but sometimes it would be too chewy. And I wasn’t getting consistent results and eventually found it was dependent on the quality and marbling of the roast which is a problem if you want to make a roast and they aren’t ‘good’ that day. I hit a wall when I made the switch to 100% grass fed and I wanted to be able to use 100% grass fed chuck roast but the ones at Whole Foods were not as marbled and so they were turning out consistently too tough and chewy.

Recalling that as a teenager I’d cooked the flatter roasts for only 4 hours at a very low temperature, I decided to experiment with the time and temperature based on what I’d done then and made an interesting discovery. When you cook the roasts for 8 to 10 hours the meat becomes like the meat still on the bones when you simmer a turkey or chicken carcass in water for long periods of time to make stock. The juiciness is gone leaving the meat dry. And the flavor is virtually gone. It was when I was able to compare a roast cooked 8 to 10 hours to one cooked for 4 hours it gave a new meaning to what ‘fork tender’ is. Cutting the time in half (which is still a long time) and finding the right low temperature, made the same considerably less marbled 100% grass fed roasts consistently come out very juicy and tender. Marbling was no longer a consideration and could be removed from the recipe, along with being concerned about the level of liquids. With the changes to ‘low and slow,’ following the recipe exactly (I mess up a lot in this area!) a pot roast can be perfect every time.

(The option of using a bone and water instead of canned beef broth is for those who are doing a strict 100% grass fed diet to avoid chemicals in the grains most cows are fed.)

Rinse meat, pat dry with paper towels and salt and pepper all sides. Heat a large Dutch oven (Le Creuset #28). Drizzle about 1 tablespoon of oil in the pot. Sear the meat on all sides, then remove it and and set it on a plate. Drizzle the remaining oil in the pot and add the chopped onions, carrots and celery (mirepoix) and sauté for two minutes. Add broth or bones and water and return the roast to the pot along with any juices that were released. Place the springs of thyme or rosemary, the sliced garlic and the bay leaf around the sides. Bring the liquid to a boil. Remove from heat. Cover the Dutch oven with foil and place the lid on top. Place in a 275 degree oven and bake 4 hours.

Every oven is different so you may need to adjust the time and you will also want to adjust the time if your roast is bigger or smaller. A pot roast is done as soon as the meat separates with a fork very easily and the fat is soft and sticky and tastes buttery. If a pot roast is overcooked it dries out and goes back to being tough and loses its flavor.

Use the juices as is (it’s not necessary to strain and no seasoning is needed) for au jus.