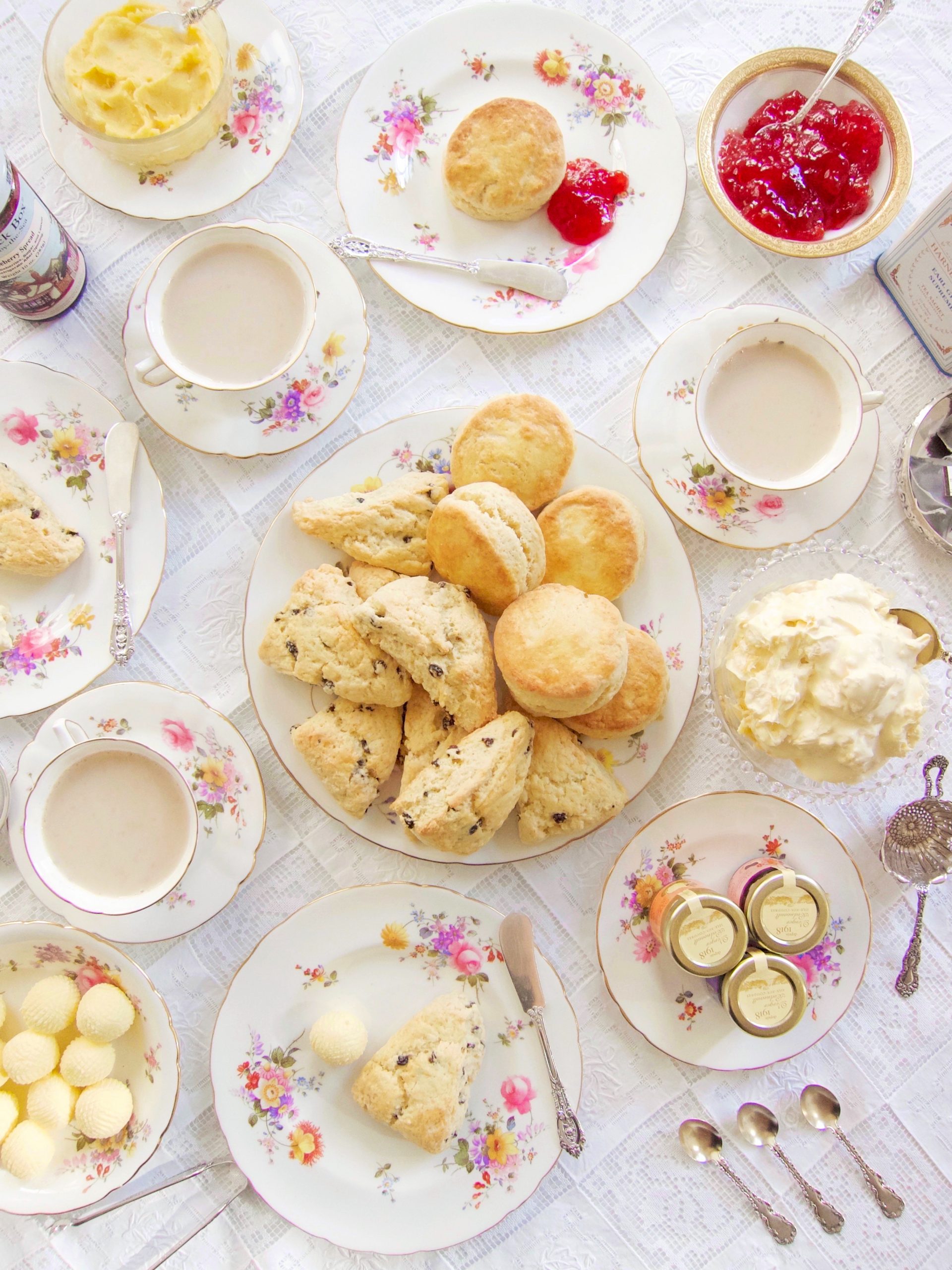 After watching the Great British Baking Show, I was inspired to learn how to bake properly (and deliciously!) using the best methods and using a scale with a tare feature and weighing instead of measuring the ingredients so your results are always consistent and when using someone else’s recipe, your results are the same as theirs. As my first project I did Lemon Muffins With Blueberries, then I made focaccia bread focaccia bread, and for the third project I wanted to do proper British scones served with clotted cream and strawberry jam.

I had the idea of starting with judges’ Paul Hollywood’s and Mary Berry’s scone recipes, but had no idea where to start with the clotted cream recipe. While there’s only one ingredient in clotted cream recipes, heavy cream, and for the most part everyone is cooking it in a 170 to 180 degree oven for 12 hours, and then cooling it for an hour and then chilling for 8 hours, then scraping off the clotted cream on the top, leaving the whey liquid on the bottom — there are still a few choices you have to make as far as the method. After my first attempt that didn’t come out right I did some more research online and saw that clotted cream is being done starting with 1, 2 or 3 pints of heavy cream and it’s being poured into an 8″ by 8″, a 9″ by 9″, or a 9″ by 13″ pyrex casserole, and someone is even using a 17″ by 13″ baking sheet for theirs. Using the different pyrex sizes means anywhere from 1/2″ up to 2″ of the 4 cups of cream going up the sides. Another choice is to cover the casserole with foil while it’s baking or leave it uncovered. And you can put it over water on the stove or in another pan of water in the oven, and decide whether to cover it or not. Looking back at these I’m guessing there’s a way to make all of them work but it can take some experimenting with your particular equipment and oven.

For my clotted cream adventure ‘take one’, I used a 9″ by 13″ because that was what the half a dozen cooks at the top of the lists on the internet that I initially looked at where using. Doing this the 4 cups of cream comes up the sides about 1/2″ to 3/4″. I cooked it uncovered which all of them also did. But the results were a beautiful golden top that was stiff shards of clotted cream with very little of the white creamy layer like the videos or pictures I’d seen on the internet. It was clear that my clotted cream had dried up too much. One of the blogs suggested putting a dried out clotted cream mixture in a food processor and slowly adding a little of the whey juices back into it. I tried this and it turned into a crumbly looking mixture, clearly not the light yellow creamy clotted mixture it was supposed to be. But my first try wasn’t a total loss. When the mixture came to room temperature it stirred together into a thick smooth golden butter-like mixture and I spread some on the scone topped with some Smucker’s Strawberry Preserves (really good strawberry jam!).

When I took my first bite of the scone with the clotted cream, while the texture may have been wrong, the heavenly butter and cream flavor was all there and I thought, ‘Where’s this been all my life? Why isn’t clotted cream being served everywhere in the United States like it is in Britain?’ As I was reading the cooks’ blogs and listening to the videos it was being said that it’s because Americans don’t like the word ‘clotted’. Well, if that’s the case, then we need to get over it because we’ve been missing out on another one of the great things that is made out of cream that’s right up there with butter and ice cream.

I had also learned a lot by the first attempt going wrong. After some more thorough research I found Chef John’s Devonshire Cream Recipe where he used a 9″ by 9″ casserole so the cream would come up between an 1″ and 1 1/2″ high in the baking dish and I would still have the beautiful golden top and it wouldn’t get too dried up because there was so much directly exposed to the heat, kind of like a pool vs. a puddle when the sun comes out. With this new plan in place I bought another 2 pints of cream.

My clotted cream adventure ‘take two’ came out perfect. A blogger had mentioned that if your oven cooks too hot, the top of the cream can turn brown. Mine hadn’t turned brown but just in case how my oven was heating was part of the problem too I bought an oven thermometer and set the oven temperature at 170 degrees this time. Switching to the smaller casserole and changing the temperature slightly made all the difference. I suspect had I used a 9″ by 13″ pan again but covered it this time, that may have been fine too.

For English tea to go with the English scones and clotted cream, Harney and Son’s Earl Grey Supreme is delicious. I found it at Giant for under $5.

This recipe is a combination of Paul’s and Mary’s recipes, adding a little salt, and using half and half instead of milk.

Line a baking sheet with parchment paper. Measure the sugar. Lightly beat the eggs and half and half together with at fork. Measure out 1 tablespoon of the half and half mixture into a small bowl and put your pastry brush with it. Cut the butter into 1/2″ cubes.

Place the flour, baking powder and salt in a large heavy bowl and mix with them together with your fingers. Add the butter and work the butter into the flour mixture until it’s like fine breadcrumbs. Add the sugar and mix. Make a well in the middle and pour in the milk mixture. Stir with a large spoon or rubber spatula to start bringing all the ingredients together.

Tip out the mixture onto a work surface and knead the mixture lightly. The less you work with the dough the lighter it will be. So just work with it until it’s finished coming all together and you have a nice round ball of dough.

Roll the dough out into a circle about 1″ thick and use a 2 1/2 round cutter to make round scones, dipping it into flour as you go and reworking the dough and cutting more circles and placing them on the lined baking sheet until all the dough is gone.

Place the cut out dough on the lined baking sheet, brush with the reserved milk mixture and bake in a 425 degree oven for 14 – 15 minutes (keep and eye on them).

Serve with clotted cream and Smucker’s Strawberry Preserves (not the seedless, jelly, jam or only fruit).

This recipe is adapted from Dart To Mouth Deli’s recipe which was awarded number one in Devon, England.

Line 1 to 2 baking sheets with parchment paper. Measure the sugar. Measure the currants. Lightly beat the egg, vanilla and milk together with at fork. Measure out 1 tablespoon of the milk mixture into a small bowl and put your pastry brush with it. Cut the butter into 1/2″ cubes.

Place the flour, baking powder and salt in a large heavy bowl and mix with them together with your fingers. Add the butter and work the butter into the flour mixture until it’s like fine breadcrumbs. Add the sugar and the currants and mix. Make a well in the middle and pour in the milk mixture. Stir with a large spoon or rubber spatula to start bringing all the ingredients together.

Tip out the mixture onto a work surface and knead the mixture until it’s finished coming together. The less you work with the dough the lighter it will be. So work with it just enough to get the job done and you have a nice round ball of dough.

You can make round scones or wedges (Kevin does round). For round, roll the dough out into a circle until it’s about 1″ thick and use a 2 1/2 round cutter to make round scones, dipping the cutter into flour as you go and reworking the dough and cutting more circles and placing them on one lined baking sheet until all the dough is gone. For the wedges, divide the dough in half and form two logs that you are going to mold into two long skinny rectangles. Press the logs to be about 1″ high, rolling the top with a rolling pin and squaring off the sides with a dough scraper. Then use the dough scraper to cut the wedges and transfer them to two lined baking sheets. Brush the tops only (not the sides) with the reserved milk mixture.

Bake in a 375 degree oven for about 18 -20 minutes (keep an eye on them). You want them to be only lightly browned. Kevin at Dart To Mouth Deli turns the baking sheet around half way through the cooking so they brown evenly.

I highly recommend picking up an oven thermometer for $6 at Target and make sure your oven is cooking at the temperature you’re setting it to.

Pour the heavy cream into a 9″ by 9″ oven proof casserole. Bake in a 170 degree oven for 12 hours uncovered. Let cool 1 hour. Cover with plastic wrap and refrigerate for 12 hours.

When you lift the golden top with a utensil, it should have a layer of soft white cream attached to it. The two layers should be just solid enough that there should be a clear separation between the clotted part and the watery whey liquid without having to figure out where the clotted cream ends and the liquid begins. The videos used spatulas to scrape off the top but I found that the clotted part was just solid enough, only breaking into a few pieces, to just lift it off with my fingers and put it in a bowl. Then I went back and got the little bits of cream stuck to the sides of the casserole with a large spoon. I ended up with 2 – 2 1/2 cups clotted cream and one cup of the whey liquid.

You don’t need to mix the two layers of clotted cream, golden yellow top and the creamy part underneath it. They will mix themselves as you transfer them to a serving dish or a jar.

When you are putting butter on something it is measured by the teaspoons but for clotted cream you use tablespoons. Images on the internet will show you that you can put the clotted cream on first then the jam, or the jam on first and then the clotted cream. Both Paul’s and Marys recipe shows the jam flowing down over the clotted cream. And at Buckingham palace, the jam is on the top so if you want to be British I suspect that’s the way to go. “While there is an ongoing worldwide debate as to whether the cream or jam goes onto the scone first, the photos released by the palace clearly show the cream is dolloped on the scone first, followed by a generous helping of your favourite jam.” Here’s the monarch’s pastry chefs’ recipe for buttermilk Royal Fruit Scones fit for the Queen.

Note: Clotted cream is only good for a couple days and then you need to freeze it in small containers and plan ahead for when you are going to use it so you can pull it out and it has time to thaw it out.

I think pancakes and waffles with clotted cream are on the menu in the near future.