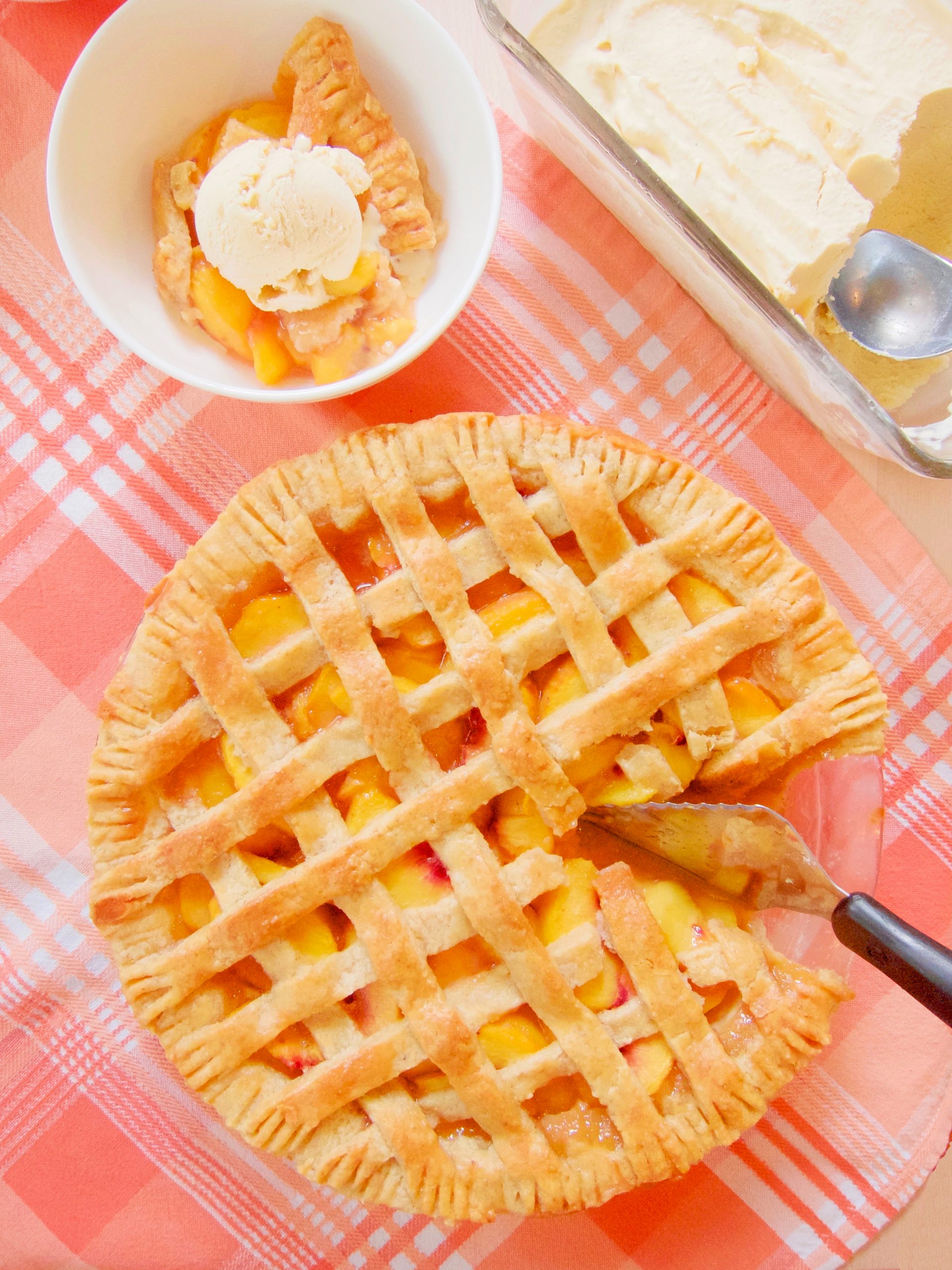 If you have eaten California peaches, they are like candy. I lived in Santa Monica and shopped weekly at the 3rd Street Promenade farmer’s market. The farmer’s trucks would pull in full of cases of the different kinds of peaches. Every few weeks the types of peaches would change and the farmers would let us know when it was the last week for a certain type of peach. The white and the yellow were both wonderful.

When I moved to Virginia I knew I’d left that behind but when the peaches came in the first summer I tried them hoping I was wrong. I wasn’t. They had no smell and they were mealy. I didn’t expect to be buying anymore peaches but after a few summers had gone by, this year I was in Whole Foods and as I passed by the peaches I glanced at the sign that said they’d been grown in California. Then I wondered if they had needed to be picked very green to make the 3000 mile trip across the county. They weren’t green. They looked perfect. I picked one up and smelled it and there it was, that candy peach smell. I took some home to try and to my surprise the food industry knew how to preserve them for their long journey across the country, and they were very, very close to being the candy that they are right off the trucks in California.

Up to this point, I had only eaten them as is and hadn’t baked with them. As I began thinking about what I would make with them that was Paleo because that was my focus for fall, it would mean the marriage of peaches and maple syrup as the sweetener which sounded delicious and was perfect for the fall season. Another perfect marriage, and also fabulous comfort food, is pie with ice cream. Maple syrup would add more liquid so I picked up some maple sugar which would make converting pie and ice cream recipes to Paleo easier.

After doing some research I settled on the Cuisinart Ice Cream Maker, under $70 on Amazon and at Bed Bath and Beyond if you use a coupon, which was at the top of a lot of the lists. It’s very easy to use and the texture of the ice cream is perfect.

This is a cooking project that you can spread over a few days so it’s not taking a whole day. The ice cream can be made days ahead of time. The crust, or at least the measuring of the dry ingredients, can be done the day before. The key is, it all needs to be timed around the ripeness of the peaches. You want them to be at their peak of flavor before they are full of brown places that need to be cut out. After some experimenting, I found peaches to be very much like avocados. To avoid any bruising, I buy avocados that are completely hard and as soon as I can press into them which is almost always the very next day and definitely by the second day, I put them into the refrigerator. For peaches, buy them when they feel firm and plan to bake them when they smell ripe and you can press into them and before they start to have the soft brown places of becoming mushy and overripe. Like avocados, peaches can also be put in the refrigerator to stop the ripening process.

Adapted from The Bojon Gourmet. Alanna was a professional pastry chef who knew how to make a proper pie dough and with this knowledge engineered a brilliant Paleo version that resembles the real thing. Reading through her recipe will be very helpful for you. I chose to use less of the ground chia seeds which meant giving up some ease and flexibility to have a cooked crust that wasn’t as gummy. This is a double recipe, both the bottom and top crusts.

Put the water and lemon juice in a glass measuring cup with a spout for pouring. Place the almond flour, cassava flour, tapioca flour, ground chia seeds and salt in the bowl of a food processor (You can measure these ahead of time into a container and have them chilled). Add the butter and place the lid on. As you pulse the machine, pour in the ice water and lemon juice through the feeding tube. Stop the pulsing as soon as the butter is in pieces a little larger than peas. Lay out two pieces of plastic wrap on the counter and divide the dough between the two. Shape the dough into 5″ to 6″ disks, wrap and chill for 30 minutes.

Roll* out a disk on parchment using cassava flour as needed until it’s 1/4″ thick, fold in thirds like a letter, then fold in thirds again until it’s a square. Lay plastic wrap over the dough and press the dough down slightly so it’s not too thick to chill, rewrap and chill 30 minutes again. Repeat the rolling out, folding and chill one more time. Roll out one of the disks and place the dough in a 9″ pie plate, piecing it if it falls apart. Chill for 30 minutes. The second disk can be rolled out and cut into shapes that you place on top of the filling (see The Bojon Gourmet), or cut into strips for weaving**. Chill the shapes and strips to make them easier to remove from the parchment when the time comes.

*Note: I do all the rolling out of the dough between two pieces of parchment, no extra flour needed. To avoid waste, I use the papers over and over, use both sides, chilling the papers in between and getting new pieces half way through.

**Note: When I do weaving, I find that paleo dough falls apart too easily to do all the folding back so I only do some folding back here and there as the dough allows. I cut 12 strips and chill the dough to make it easier to remove the strips. I lay the first strip about 1 1/2″ from the edge of the pie, turn the plate and lay the next one on top of the first one along the next side, then repeat two more times until there are 4 strips forming a square on the peaches. Then I repeat moving inward and the square gets smaller until I lay the last two pieces criss-crossing each other straight down the middle. If you are able to easily pick up pieces and get under them, go ahead but it will look fine if you can’t.

Bake in a 425 degree oven for 15 minutes, lower to 350 degrees and bake for 45 minutes. The collar may stick in a few places. In order not to pull any of the crust off, remove it carefully by folding it back and using your fingers to release it from the edges. Tapioca flour looses some of it’s thickening ability when you cook something for a long time. The filling will not be thick like when you use regular flour but I find having the extra sauce is very nice.

Note: To make a collar, you will need three to four (depending on how wide your foil is) 4″ pieces of foil. Attach them together in to a long strip by folding the ends together. Then shape the strip in a C shape to enclose the crust, tearing off excess length. Wrap the collar around the crust, overlap the two ends, crimping at the bottom to hold them together, and mold the collar up and over the crust without disturbing the crust.

Heat 1 cup of the heavy cream and 3/4 cup water in a saucepan until very hot, but not boiling. Remove from heat.

Place the yolks and sugar in a standing mixing bowl and beat on low for one minute or until slightly thickened. With the mixer running slowly pour in the warm cream mixture. Transfer this mixture to the saucepan and heat until it thickens and coats the back of a wooden spoon. Use medium heat so it doesn’t boil and stir constantly. Transfer to a bowl and add the remaining 2 cups of cream, the vanilla extract, vanilla beans and salt. Cool, cover and chill thoroughly.

Put a glass 2 pint storage container, casserole or bread pan in the freezer.

Follow the directions on your ice maker. If using a Cuisinart Ice Cream Maker, the ice cream maker bowl will have been in the freezer. Place it in the base of the machine and put the paddle and lid in place and pour the mixture into the machine through the opening in the lid. Turn the machine on and process 25 – 30 minutes. The ice cream will have a soft serve texture and you can eat it right away or transfer all of it to the prepared glass, cover it and put it in the freezer.