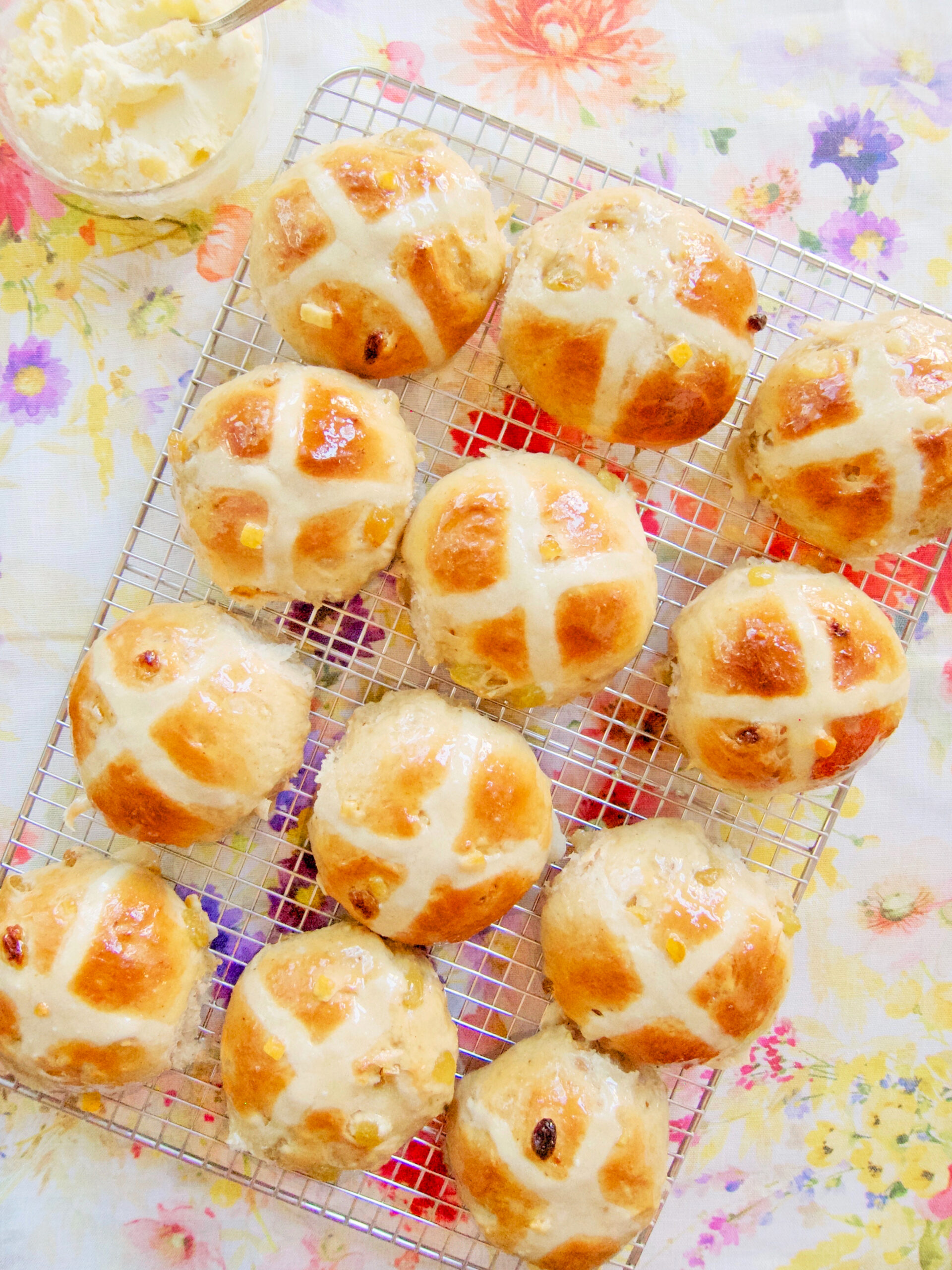 “A hot cross bun is a spiced sweet bun usually made with fruit, marked with a cross on the top, and has been traditionally eaten on Good Friday in the United Kingdom, Ireland, Australia, New Zealand, South Africa, Canada, India, Pakistan and the United States. They are available all year round in some places, including the UK.

“The bun marks the end of the Christian season of Lent and different parts of the hot cross bun have a certain meaning, including the cross representing the crucifixion of Jesus, and the spices inside signifying the spices used to embalm him at his burial and may also include orange peel to reflect the bitterness of his time on the Cross.”
Wikipedia

Mary Berry’s hot cross buns recipe uses lemon zest and Paul Hollywood uses orange zest. I’m sure they are both great. I recommend watching Mary Berry’s hot cross buns video. She uses a standing mixer in the video and it’s put together a little differently than her recipe. I followed her BBC recipe which has you kneading by hand, adding the step of making a well for the liquids and stirring everything together with a spoon rather that getting you hands messy before the dough goes onto the floured work surface. I also doubled the amount of mixed peel because the 1 3/4 ounces listed in the recipe was such a small amount that I thought it may have been a typo. It looked like both she and Paul had more in their videos.

In this recipe I have mentioned where I missed some steps. These steps did not prevent a good outcome. The most important part of bread making is the proper proofing time. As long as you are in the general vicinity of doing the other steps correctly and you get this step right, you will be happy with the results. The timing of the rising until doubled in bulk is something you get better at with practice, but this recipe with all the heavy fruit in it weighing the dough down would not be a good place to start. Practice with basic rolls working your way up to rising this dough. The test for having done it right is when you cut open the roll or bun (or any bread) and push down on it, it bounces right back up. If you under-proofed the dough, when you press down on it, it will leave a dent, or when you eat it, it becomes an unpleasant wad of dough in your mouth.

These buns are a wonderful holiday addition with their holiday spice and citrus flavors. And they are completely delicious, just as Mary Berry says in her video.

If you have the time, make a batch of clotted cream for them the day before you make the buns. Once again, it’s so worth the extra trouble. Clotted cream on scones and these sweet buns is divine.

Put the flour, sugar, spices and lemon zest into a large bowl and whisk together. Then add the salt and yeast, placing them on opposite sides of the bowl.

Melt the butter in a pan and warm the milk in a separate pan. Make a well in the flour mixture and add the egg, butter and milk and stir together with a spatula or wooden spoon, incorporating the flour mixture, yeast and salt, around the edges as you go.

Tip the mixture out on to a lightly floured work surface. Fold the dough over itself by hand, incorporating the sultanas and mixed peel into the dough. Lightly knead for 10 minutes until silky and elastic and forming a smooth ball. (The kneading can also be done in a standing mixer with a dough hook.) Wash, then oil the large bowl and place the dough in the bowl and then turn it over so that it is covered with oil. Place a piece of plastic wrap (or waxed paper and a dry dish cloth) over the bowl and set in a warm place to rise for 1 1/2 hours or until double in size.

Turn the risen dough out on to a lightly floured work surface. Knock back and knead a further 5 minutes. Return to the bowl, cover and leave in a warm place to rise for a further hour, or until double in size. (I missed part of this step and I left the dough in the bowl and punched it down and folded it over itself 5 or 6 times. Then set in back in the warm place.)

Turn the dough out onto a floured work surface and divide into 12 evenly sized pieces (I used a scale), shaping each of these into a ball. Line 1 – 2 baking trays with parchment paper and place the balls on the tray, placing them fairly close and flattening them slightly.

Slip the baking tray(s) into a large clean polytene bag (for the one large baking sheet I used one Reynold’s Kitchen Oven Bags Turkey Size), making sure the bag doesn’t touch the buns. Leave in a warm place for 40 – 60 minutes until the buns have doubled in size. (For me, the 3 rising times took longer than the recipe said. But according to Paul Hollywood long rising times means more flavor.)

Preheat the oven to 220C/200C Fan/Gas7 (425F). (Second mess up…I’m new at the British cooking lingo and I didn’t translate C into F right and started off at 350F and after 12 minutes when I noticed, I bumped it up to 425F for the remaining 8 minutes. 350 is the standard roll temperature but you need these buns to get a little darker to show off the flour crosses.)

For the topping, in a small bowl place 2 3/4 ounces flour and 100ml/3 1/2 fl ounces water (I needed to add between 2 and 3 more tablespoons of water to make it the right consistency. Whisk until smooth. Cut a small opening in a piping bag. To fill the piping bag, place the tip side at the bottom of a glass and bring the bag up over the sides of the glass. Spoon the topping into the bag.

When the buns have risen remove the polythene bag(s) and pipe a cross on each bun. Bake for 15 – 20 minutes until pale golden-brown (she says “pale” but you want darker than what we refer to as pale), turning the baking tray(s) round halfway through if necessary.

Melt the golden syrup in a pan and while the buns are still warm, brush the buns with a little syrup to give a nice shine, before setting aside to cool on a wire rack.

Cut them in half through the middle and serve warm with butter or clotted cream. She says she gets them warm again the next day by toasting them.

Recipe tip: These will keep in the freezer for a month.