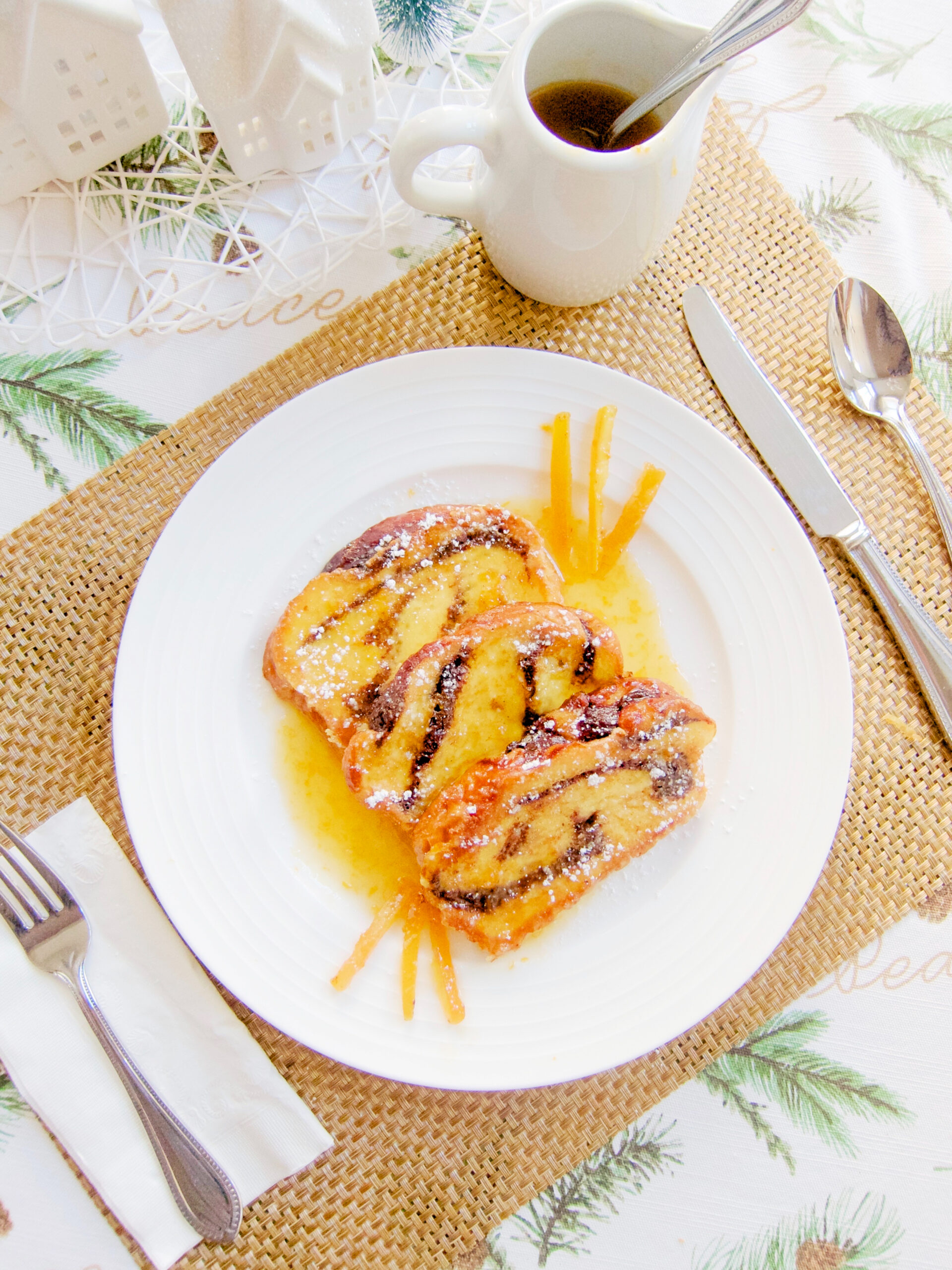 For last year’s Christmas Panettone French Toast I used only bread, eggs, butter and maple syrup, a simple recipe from my childhood.

A basic custard recipe has several variations, plain or with spices and flavorings, and after you’ve figured out how you want to do it, there are dozens of delicious toppings to choose from. This week my kitchen felt like a French toast version of International House of Pancakes as I tried all different breads and toppings.

There are some important nuances I discovered like the ratio of milk/cream to eggs and also the amount of sugar. Also the thickness of the bread and the soaking time make a big difference in the results. Bon Appétit’s article says, “The ideal thickness for a slice of French toast is 3/4″ to 1″ thick.” Using thick bread and soaking it causes it to become fluffy inside which is what makes the dish like bread pudding. You may not like it this way. You may prefer the thinner version. Some cooks are saying sour dough is the best bread to use. This probably has to do with preferring the denseness of it. Others think brioche, which is very light, is the “ideal” bread to use.

Another set of nuances that made big differences had to do with the age, or dryness, of the bread. The French call this dish “lost bread” because they use day old bread. You can also toast the bread lightly to dry it out.

As I played with the soaking, I learned that you completely miss out on the fluffy bread pudding texture if you don’t soak the bread and some breads will soak up the custard faster than others. Also the temperature of the pan and the cooking time changes the inside from being fluffy, but maybe too mushy, to being fluffy with more texture. To avoid dealing with a possibly mushy center where the eggs didn’t have enough time to set well, I added the step of baking them in a 350° oven for 10 minutes and this made them fully puff up and they were perfect inside.

I’m guessing there are a lot of great ways to make great French toast and it may be difficult to choose a favorite. The three I chose for this post are all delicious and then you will find a copycat from a local French restaurant at the end of the post.

I wish I could make French toast a different way every day for a month.

Add vanilla, cinnamon and nutmeg to the custard. (She calls for 2 tablespoons of vanilla. There are Vanilla French Toast recipes that call for this much. Normal recipes are about 1 teaspoon per 1/2 cup milk or cream.)
Martha Stewart’s Classic French Toast

Make the custard with eggnog, vanilla, nutmeg and cinnamon. “Serve with melted butter, a dusting of powdered sugar and a drizzle of maple syrup.
The Girl Who Ate Everything’s Eggnog French Toast

How does French toast with caramelized peaches or pears or apples sound? Yum!

Day old bread works well but this website says oven toasting the bread first will create a crispier outside. “Set a wire rack on a rimmed baking sheet in the oven and preheat to 200°F. If using very fresh, moist bread, arrange slices in a single layer on the rack and cook in oven, turning once, until lightly toasted, about 10 minutes.”
Serious Eats’ Perfect Quick and Easy French Toast.

“Serve the French toast warm from the skillet with maple syrup, agave nectar, or your favorite topping for breakfast. (Blueberry compote or sauteed apples are also nice.) A little pat of butter could also go on top as well. It can be served for dessert, as the French do, which is called pain perdu (lost bread), along with a scoop of ice cream and some caramel sauce.”
David Lebovitz’ Panettone French Toast

The Daring Gourmet’s Candied Orange Peel is a nice garnish for French toast. You can also use a julienne tool for more slender garnish and skip the initial boiling that removes the bitterness and just do the simple syrup boiling that turns them translucent and candy-like where they are both sweet and bitter.

(Pictured: French toast made with panettone bread and served with marscapone and Cinnamon Syrup)

Preheat the oven to 350°. Place a wire rack on a baking sheet in the oven. Whisk the eggs, cream, milk and sugar together (and spices if using). Pour this mixture into a lasagna type casserole. Heat the griddle or large skillet and add a tablespoon each of butter and avocado oil. Lay the bread in the custard and let it soak for 10 minutes on each side, then place in the skillet and cook for about 4 minutes on each side, or until golden brown. Transfer to the rack in the oven and bake 10 minutes to set the custard in the middle. Don’t leave in the oven or they will overcook.

Combine the water and sugar in a small saucepan. Bring to a boil stirring a few times to get well mixed. Let boil down to 1 cup. Remove from heat and whisk in the cream and cinnamon. This can be made ahead of time and refrigerated and rewarmed before serving.

Place all ingredients in a small saucepan and bring to a boil. Skim any foam off the top. Then keep warm. These ingredients separate so you need to spoon this sauce over the toast.

(Pictured: French toast made with chocolate brioche topped with melted butter with honey and orange zest spooned over the toast and served with candied orange peel)

Follow the link to make your own candied orange peel. You have the option of coating them in sugar or leaving them glazed.